The best and most effective step toward hive health is Varroa mite control. I recently heard Dr. Zachary Huang speak about dead colonies; he estimates 90% of all hive deaths may be traced to Varroa mites. Varroa mites vector diseases that shorten bees’ lives—resulting in fewer bees to fill up the cupboards for winter, fewer bees to keep the queen warm and soften honey for consumption in January, fewer bees to nurture brood when snow is flying in February.

My favorite resource for all things Varroa is honeybeehealthcoalition.org/varroa/: great videos on how to test to see if your colony is in trouble and how to use a particular treatment if it is, and great info in the free guide on how many mites is too many. Mites are such a big deal that nationally there’s a week in early September to test and treat, see http://www.beeculture.com/catch-buzz-2017-north-american-mite-thon-saturday-september-9-saturday-september-16-2017/?utm_source=Catch+The+Buzz&utm_campaign=e6817c6dbf-Catch_The_Buzz_4_29_2015&utm_medium=email&utm_term=0_0272f190ab-e6817c6dbf-331925437.

We’re monitoring all our hives now, with interesting results. We’ll find (fabulous!!) counts of zero or one or two mites (not percent, but actual buggers) in some hives, only to shake out a nauseating 18 of the wiggly red things in an adjacent hive. The “acceptable” number of mites varies by season, but 18 is never acceptable. That result means we’re treating all the colonies in that yard. After the treatment period, we’ll test to make sure our treatment was effective. It is SO rewarding to see dead mites on the Mite-Away Quick Strips (for example), but I’ve learned the hard way to not lose sight of the live mites not in my sights, and thus–retesting is essential. 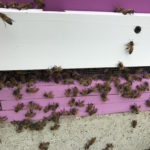 Lots of designs for robbing screens; here’s one we like. Presumably all those bees banging against the screen are robbers. This is a smaller colony in a busy apiary.

A second thing we’re doing is installing robbing screens. In years past, especially during times of dearth, we’ve seen serious robbing. We’re eliminating that possibility this year with the robbing screens, and we’re also alarmed at how many would-bee-robbers there seem to be. Our robbing screens have a screen that fills the usual entrance, and a channel above that which is the new entrance. We install them at night, so the bees who rightfully live there have to emerge through the changed entrance the next morning, and (hopefully) reorient to it. Any robbers hang out in the (now) screened over entrance, and sometimes it is an alarming amount.

There’s a great blog on robbing here: https://honeybeesuite.com/how-to-stop-robbing/. It is frightening and disheartening to watch … and we humans aren’t even the ones seeing our work carried off and losing comrades in the battle.

A third key thing to help boost your colony’s health is feeding. If the larvae aren’t afloat in royal jelly, there’s likely a protein shortage. The drought has made this a reality in many areas. Consider adding part of a protein patty into the hive, but keep an eye on it. Small Hive Beetles love to invade them.

Colonies still struggling with building up could probably use a boost of sugar syrup, possibly heavily laced with honey or something like Honey-Bee-Healthy. Feed internal though, as to not invite robbing. One of my favorite feeding approaches this time of year is to move the Boardman feeder over the inner cover, with a box around it, and of course, the top cover. I block the external entrance hole found on some of the inner covers so robbers don’t come in. I figure the colony can use the “attic space” during our hot days, and I can easily check the level of the feed in the jar with minimal disruption to the colony.

Mite monitoring, mite treatments, feeding, supering, helping them defend, mite monitoring again – August is a busy month for beekeeping. While every day is honeybee day for a beekeeper, on August 19th, take an extra second to tell your stinging insects how much they’re appreciated and loved.