Background:  I began keeping bees with a death threat hanging over my head.  My husband Tom had been diagnosed with colorectal cancer, and needed me to care for his two bee-loved colonies while he aggressively fought the disease.

Wanting to support him however I could, I bee-grudgingly took care of his doggone stinging insects, and in the process, fell head-over-hive tool in love with them.

When Tom passed about a year later, the bees helped me grieve by giving me frequent challenges and the occasional sweet reward of honey, and motivating me to focus on the future and plan for next season and future.  I will forever be grateful for the assistance from these angels with real wings.

With the holiday of Thanksgiving almost upon us, I’m reflecting on other bee-related things in my life for which I’m immensely grateful.  They include:

BEES:  as without these vital pollinators, our dinner table would lack pumpkin pie, cranberries, applesauce and blueberry muffins.  They’re also helpful for pollinating brussel sprouts, but frankly—I think we can do without those.

STINGS:  I marvel at inter-species communication—like when my dog climbs next to me and places her paw on my leg; or when the bees buzz loudly about me, but then settle down and check me out with amused curiosity.  It is magical when they perch on my hand and gaze at me (with lots more eyes than I have) while I gaze back with a mere two eyes.  I swear they smile. 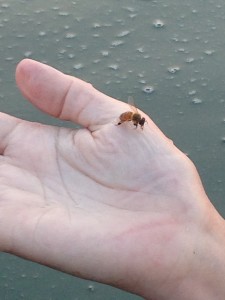 Initially it was unnerving to discover they’re just as curious about us as we are about them, but now I appreciate those shared moments.

However, I do hate it when instinct kicks in and they misinterpret that I’m a threat.  Stinging kills the one (or seven) doing the stinging, and really hurts the one getting the sting (me).  But, the occasional sting makes me appreciate even more those moments when I know the bees and I are connecting on a mystical, peaceful level.

NEWBEES: I often say the longer I keep bees the stupider I get, because bees continue to teach me so much that I often don’t feel I’m very far along the very steep learning curve.  And then I will mentor a beginning beekeeper, and realize I do know a little something.  Years of experience have taught me to readily identify a drone, and given me the ability to drone on and on about them.

OTHER BEEKEEPERS:  Beekeepers are the nicest people; I love hanging out with them. 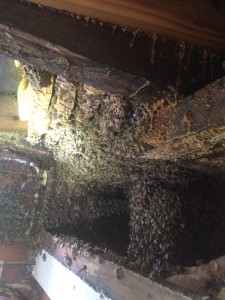 What’s under your roof?

BEE COLONIES BUILT BEHIND EASILY REMOVED STRUCTURES:  Honeybees that have moved into campers and other interior spaces are nightmares for the owners, but what I dream of.  It is so fascinating to see how a wild colony builds their home; it is so rewarding to move them to a new home where they are bee-loved instead of feared.

Note I said “easily removed structures.”  We’ve done our share of third-story and hot, dirty crawlspace cut-outs.  Perching atop a 36’ stepladder is a double adrenalin rush (wobbling AND stinging insects) that I don’t care to repeat very often.

NUC BOXES:  I love doing a split into them, hiving a swarm into them, turning around a struggling colony with them and best yet – lifting them!  Plus, a little five-frame hive is so doggone cute! 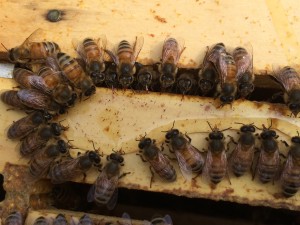 Is this what it looks like inside the hive on Thanksgiving?

FEASTING:  While I’m sorry when I accidentally open their honey and spilled it in the hive, watching bees clean it up, relatively unconcerned about me and my camera, is fascinating.  I feel a bit bad looking at this feasting photo though, because come Thanksgiving, I’ll be feasting on their honey … and they’ll be cuddled in the hive, trying to stay warm.

Thanks bees, for all you’ve brought to my life.

What unexpected blessings has beekeeping brought to you?