I have a girlfriend who fosters cats.  It’s lots of work, but she loves it and has learned a lot.

The biggest thing she’s learned over the years?  Her limits.  She says six felines are all she can handle and love without going crazy.

I asked her how many she had at that time.

Thinking about her answer still makes me laugh.

Beekeeping hubby and I decided our limit to bees was 20 colonies.  Anything more than that is real work.

The answer to your question?  Thirty.  Feel free to join me in laughing at myself.

You can never have too much money, too much chocolate, or too many bees, right?  (Actually, having that many bees likely will keep you from having too much money!)

The Kalamazoo club president. Sheldon, was out of town last month, and asked me to lead the monthly “work the club hives” effort.  He said he never asked before because he knew we were fairly busy with our own bees.  But he couldn’t be there and really needed an experienced beekeeper to go through the hives and demo a powdered sugar roll.

I agreed, but reluctantly.  I feared it would be 85 degrees that day and stupid hot.  Probably no one would show up and half our bees would swarm while we were gone. 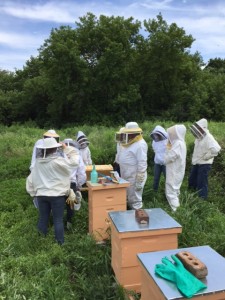 July’s Field Day. I’m the one in the bee suit. 🙂
Special thanks to Brenda for checking the top bar hive and leading that review.

I was wrong about most of that.  It was about 95 degrees, which is really, really, really stupid hot.  I don’t think any of our bees swarmed that afternoon.  (It was too hot; they couldn’t conjure up the energy.)  And lots of people showed up.  Thank goodness I’d grabbed my beekeeping husband, and snagged a second year beekeeper as well. Lots of hives, lots of questions.

Later that day (after lots of fluid consumption, much of it the adult beverage kind), I realized I needed to apologize to Sheldon for never having attended a Club Field Day.  I should be there as often as I can make it.  That many hives, that many people … as many experienced beekeepers as we can have there is helpful.  We all have something to share, and we all have plenty of things to learn.

Sure, that means a bit of chaos, lots of different opinions—likely some of them contradictory.  That’s beekeeping.  But, we’re all in this together.  We’re stronger and more successful as a group, just like bees.

And bees need us to be strong and successful.  Their survival, and ours, depends on it.

Hope to see y’all on Sunday.  Check out the where and what under the ‘Events’ section of this website.  I’ll be there, unless I’m chasing a swarm.