We have one hive that is still alive. The Mountain Camp feeding method is working beautifully, but its success hinges upon a certain beekeeper (ahem, me) getting my butt out to the field to refill the sugar. Unfortunately, by the time life gave me the free time to do such a thing, two hives had starved out. I’m kicking myself daily for such an oversight.

The hive closest to our house, however, is still alive and strong. So this weekend, as we were watching the news report about sub zero wind chills and 45 mph winds, we started to worry about our remaining hive. I mean, we’re so close to spring! If only it could hold on a little longer!

This got me thinking. We also raise chickens and turkeys and every so often one of them dies or gets picked off by a predator or a passing motor vehicle. We have even butchered a fair number of them ourselves, but the death of a honeybee is remarkably sadder. And I don’t think it’s all about money. Certainly replacing a hive is more expensive than replacing a chicken, but I have a stronger emotional connection to the bees than the poultry we raise. So I’ve isolated a few reasons why I personally love honeybees. I like to tell people that these are the causes of my insanity (people who know me can attest to the fact that I was crazy long before I started keeping bees).

Endangered Species: And How I’m Saving the World

Ok, I’m not sure if bees are technically considered endangered species (an interesting article about the topic can be found here), but raising them makes me feel as noble as those people who raise pandas at the zoo.  When a bee dies it feels like a setback in the world of honeybee population in general. There are not enough bees: fact. So raising bees feels like a social movement, not just a hobby. This is why it is so devastating when they die. It’s sad because I love them and it’s sad because it costs us money, but it’s really sad because bees are so desperately needed in this world. Sure it’s a bummer because we’ve put so much time into them, and because we so carefully manage and study them. By the end of the summer it begins to feel like we know them. Each hive does have a different personality and, when they are gone, it does feel like a loss. In addition, a hive is made up of tens of thousands of bees, so the impact is really quite striking. When you find a dead hive, there are literally, tens of thousands of dead bees to sift through. It’s just sad. That’s really all I can say. 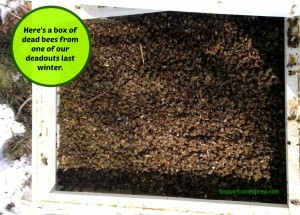 I remember a gentleman at our very first bee school saying that he likes to just go out and sit with his bees. He said he found it to be very calming. At the time I thought he was a crazy bee man, but I now understand why he would enjoy such an activity. When you go out to check the hive, take honey, etc it is referred to as “working the hive.”  When you do this, you move slowly and deliberately in order to prevent upsetting the bees and also to prevent squishing them as you move the hive components around. Sure you’ll use a little smoke, but moving slowly is just as effective, really.  This slow movement makes for a calming experience.

In addition, when you first start working the hives, you’ll have a mind over matter situation. If you wear a bee suit you know, in your mind, that you can’t get stung, but your adrenaline rises anyway as dozens of bees buzz around you.  I enjoy this now, but when we first started I had to really force myself to stay calm and work slowly. It’s normal to feel some twinges of panic in the beginning or worry that a tickle in your jacket is a stray bee, but you force yourself to just breathe and stay calm. When you are finished working, you also walk away slowly and make sure you don’t have any bees attached. So, in effect, you’ve just had quite the meditative half hour or so and you really do leave the experience in a very zen state. I swear it’s true!

So far, to me, the most amazing things about raising bees are the things you see when you are working them. It’s like a real life game of I Spy (however, if you’ve ever poured over these books with a young person, you might not think this sounds like fun. At. All.) Finding the queen is a challenge, studying the comb and determining where there’s brood is a learning experience. Below is a picture of one of our queens from last summer (she has the green dot on her back) surrounded by her nurse bees: 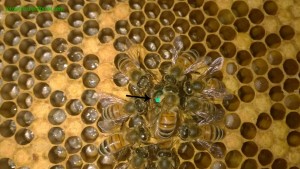 Frequently, when my husband and I are looking in the hive we actually watch a bee being “born,” so to speak. We watch her little feet wiggling out of the cell she had grown in and as we stand there watching, she slowly emerges, stretches her wings for a few minutes, and then flies up into the air. I’ve seen it dozens of times, but I enjoy watching every single time. Here is this tiny piece of nature’s cycle, happening thousands of times a day all around us, and we actually get to see it!

Wikipedia has captured this moment as well, but trust me, it’s definitely cooler in person: Likewise, I find it very adorable to watch the workers come back to the hive with their pollen sacs full of bright yellow pollen. It looks like they are carrying little saddlebags on their back legs. As you have the hive open, you can watch them fly in and go right to work. 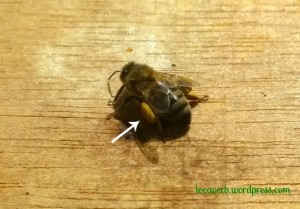 Another cool bee tidbit is that they kind of have “rush hour” at the hive. When the sun is first up and shining onto the hive, you’ll see a steady stream of bees exiting the hive. In fact, if you stand in this flight path, a bee will most certainly fly into your forehead (trust me, it will happen). Around dinner time, most of the workers are returning home from the hive and you’ll see a bottle up at the hive entrance from time to time. It’s like being on the freeway at 5:00. There will be many in the air, circling around, waiting for a clear place to land and a little jam up like this: 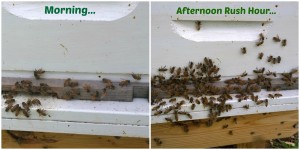 Visitation: When Bees Visit You

Our hives are in the back corner of our backyard and a couple are in our back field (about 2 acres in size). We have not noticed any increase in bee traffic (unless you are standing right in their flight path), but are definitely more aware now of what we are swatting at when we sit outside or have a BBQ.  When things buzz around our heads we are always saying, “Is that one of ours?” before anyone starts swatting. Likewise, I’ve fished many struggling honeybees out of my son’s pool. My five-year-old even asks about different bugs he finds and always wants to know if it’s “one of our bees.” It’s given me a new appreciation for the pests that buzz around at picnics and it has made me less likely to swat or spray.

The day we brought home our first nuc, we opened the back of the pickup truck and stared at this unassuming white box. We were having a “well, we’re in it now” kind of conversation when we saw little antennas poking through one of the air holds on the side. We watched and as the minutes ticked by antennas became little legs, then a head and eventually one bee worked itself out of the box. She flew up and around our heads and we joked, “Oh no, we lost one!” and my husband hoisted the box and carried it into the backyard. I followed behind and quickly realized that we had a third in tow. That little honeybee was flying about 2-3 feet above and behind my husband’s head, just kind of crisscrossing the air as he walked. When we reached the spot where we were going to set up the hive, he set the box down and that little bee landed right on top of it and waited. When we opened the lid, others flew out and they all melded together into one buzzing group in the air above us while we transferred the contents of the box into the hive. That moment was pretty cool and that was the probably the moment I fell in love with the little suckers. 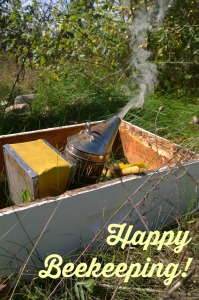