By Charlotte Hubbard
Author of “Dronings from a Queen Bee”

The first fall I lived on my own, the gales of November had just started to blow bitterly when I found evidence that I wasn’t really living on my own. There were mouse droppings throughout my kitchen.

I purchased and baited traps, and stood ready for the critter’s return. Later that night I called my parents to proudly tell them how I’d solved that problem, all by myself.

My Dad then said something I’ve never forgotten. “You actually have two problems. The first is the mouse; the second is thinking you only have one.”

Sure enough, and as usual, Dad was right. Over the next few months, I unloaded and reset traps numerous times. Had I saved and stitched together all those little pelts I could’ve made quite the giant mouse costume.

Fast forward several decades, to early October of this year …

I tell beekeepers October is the time to reduce hive entrances; the gales of November can come early. Inside the hives, a dwindling bee population is busy keeping warm, defending stores, and ensuring that field mice don’t move in to a shelter stocked with months of honey.

I tell beekeepers to reduce entrances in October—latest. You want to minimize the chances a critter will get in the hive before the critters get in the hive. One of my favorite “picture is worth a thousand words” photos is of several dead mice inside a hive come spring. It is from one of my mentees—a mentee whom I’d told over and over again to reduce entrances. (He finally got around to it last Christmas.)

To his credit, the mentee did call last spring to tell me he should have listened to me. Not only did he find several dead mice in his surviving hive, but he also found that the entrance reducer was chewed from the inside—clear evidence that the mice were already living inside when he made it impossible for them to get in, or out. I detest critters in my hives as much as the next beekeeper, but that still made me cringe. Being stung to death is a horrible way to go, especially if you’re trying frantically to gnaw your way out.

Thinking about that beekeeper, and following my own advice, the first warm afternoon of October I reduced entrances on all our hives. There’d already been some chilly nights, but I was confident that any mice were out, perhaps enjoying the beautiful fall foliage or at the rodent bar watching upsets in college football.

A few days after I’d reduced the hive entrances, I looked at the pile of laundry, and the sunny skies. Laundry can wait, there wouldn’t be many more of these days. While saying I needed to check the bees, I really just wanted an excuse to enjoy the weather, and decided to stroll through the apiary. Slipping out the door, at the last minute I grabbed my veil. You never know what you’re going to find at the hives, although I assumed there’d be nothing unusual.

Another bad assumption. I swear the longer I keep bees the stupider I get.

The first three hives were as expected—bees buzzing in and out, warm sunshine bouncing off the metal top covers. But the fourth hive, usually one of the strongest, wasn’t very active.

I looked more closely … and soon understood why. The head of a dead mouse was clogging one of the hive’s two small bottom entrances. (Look on the left side of the photo. The grayish wooden piece is the entrance reducer, which had a gap on the left side. A few bees are backed up waiting to use the only open entrance.) 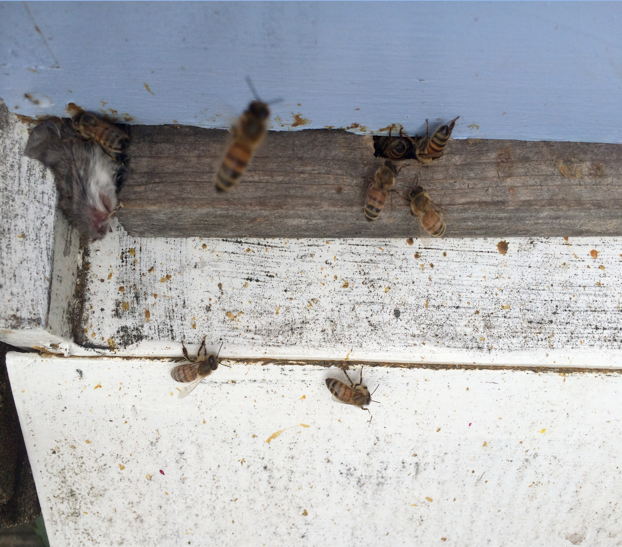 The words of my mentor echoed through my head “reduce the entrance before the critters get in!” Oh wait, those were my words … the same words I’ve preached to so many newbees. I barely choked as I ate them.

Thank goodness I’d happened to grab a veil. Armed with a few sticks, I pried out the entrance reducer and released a torrent of bees. They didn’t seem upset, but rather—appreciative of the ability to come and go more freely. They seemed delighted to be rid of the decomposing rodent stuck in their doorway, stuck much like Winnie the Pooh in Tigger’s doorway. Except Pooh Bear was always alive.

I examined the small rodent closely. It was riddled with stingers—a dozen or more brown and black spots all over its body. A lot of bees sacrificed in the battle. Sorry bees.

And then I remembered Dad saying there’s never just one mouse.

I poked a longer stick through the front opening. Within seconds I’d locating something that felt like a pillow or another mouse. Yep. This one was twice the size of the one who’d died with its head in the opening. Perhaps a parent?

Thinking of my wise parent, I swished the stick in one more time and located a third rodent, also large. And also dead, its body dotted with stingers. Thanks for killing that one also bees. People in Arkansas probably would’ve heard me scream if a live mouse had raced out while I was poking a stick into the hive.

My probing didn’t reveal any more mice in that hive, or the other hives. I’m glad I got those dead critters out before they decomposed in the hive, but regret my role in their death, and the loss of bees.

It is said that the cost of a mistake is diminished if you learn from it, so I reflected on my lessons learned:

Based upon my experience with hundreds of hives, before I routinely reduced entrances every fall, only about 10% of the time did critters get in to a hive for the winter. But, the substantial damage done to the bees’ stores and honeycomb makes it well worth the effort to prevent, in my opinion.

Some critters can gnaw into, and out of, wooden reducers. I prefer to use a metal grate in areas where I know rodents are rampant. (Like my field hives where I frequently see field mice.)